You've just reached the final round of Hanks League, a winner-take-all card tournament sponsored by actor Tom Hanks. On the eve before your big match against Hanks himself, someone steals your winning stash of cards. Now, with only hours remaining before the final contest, you must rebuild your collection or risk forfeiting everything you've worked to achieve.

Do you have what it takes?

Hanks League is a short RPG adventure inspired by the television and film career of Tom Hanks. Card game mechanics based on Triple Triad from the Final Fantasy series.

From the main map:

A key - Launches the challenge dialogue when you talk to a character.

From the card selection screen (once you initiate a match):

Z key - Removes the card you hover over from your hand

Down direction arrow - Moves the pointer down to the card selection box. From there, move up and down to select a card with the Z key.

X key - Returns the pointer to the cards in your hand. You'll notice that the card under the pointer lifts up. Pressing the X key a second time from that position, will launch the match.

Left and right directional arrow – Moves the pointer down to the opponent’s cards, when applicable. From there, you can select which card you want to take with the Z key.

*Note: For some types of matches, the card choice will be made automatically, and you’ll just need to exit the menu.

X key – Exits the selection menu and returns you to the map. 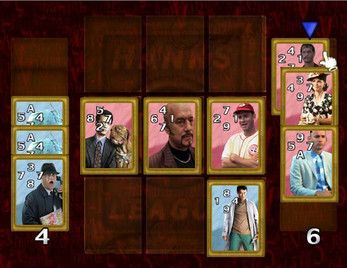